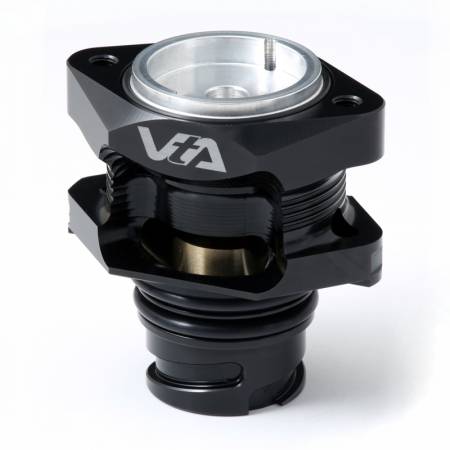 Not just a noise-maker, heart racing sound with power!

(0) Reviews: Write first review
New
T9464
**Note: This product has fitment notes for some models. Check the documents tab below for more information**

If you want sound with your performance (or performance with your sound!), Go Fast Bits VTA delivers just that! Rather than just venting that factory diverter valve to atmosphere, the VTA replaces the weak factory valve internals and delivers an aggressive blow off valve sound, improved throttle response and boost recovery, as well as superior boost holding and reliability in extreme conditions.

This means we retain ECU control and the solenoid from the factory diverter to ensure the fastest possible response time, without the added and unnecessary cost of replacing the solenoid like some brands do.
The weak part of the factory diverter has always been the plastic valve mechanism – this is the part we replace. The VTA features CNC machined billet components that last a lifetime, and we also change the valve operation method for better performance. The factory diverter valve can only operate in two states – open, or closed. When it opens fully at low boost, or during a partial throttle lift mid-corner, it causes increased lag and a noticeably non-linear boost transition.

Pilot Operation
Go Fast Bits pioneered the use of “pilot operation” in the DV+ range, which works by re-purposing the factory solenoid to control the pressure behind the piston rather than the piston itself. This allows the solenoid stroke to be much shorter, speeding up the response time and increasing the actuation force. More importantly, it allows
the piston to open and close progressively in response to the amount of boost pressure present, which smooths boost transitions and reduces the lag caused by the factory diverter valve.
It is this design philosophy that makes the VTA not only the best performing blow off valve solution, but also the best value on the market.

Direct Bolt-On Kit
As you would expect from a Go Fast Bits product, the F150 VTA comes as a direct bolt-on kit. When we say bolt-on, that’s what we mean. Other products use brackets that don’t bolt up to the OEM diverter mount holes, meaning they are useless on aftermarket intercoolers, and because they have to supply two to cover all year models, the brackets are cheap and flimsy.
Our bracket is powder coated stainless steel, and is designed to replicate the footprint of the OEM diverter valve mount. This means it fits all 2013-on models, AND aftermarket intercoolers. Not only that, the blanking plug is attached to the bracket so it plugs the recirc AND holds it securely in the engine bay.

Why choose a VTA over other brands that include a solenoid as part of their kit? Because there’s no performance benefit to replacing the factory solenoid, only a much higher price! The VTA with the factory solenoid IS the fastest, most responsive, and most cost-effective blow-off solution on the market – why pay more than you need to?