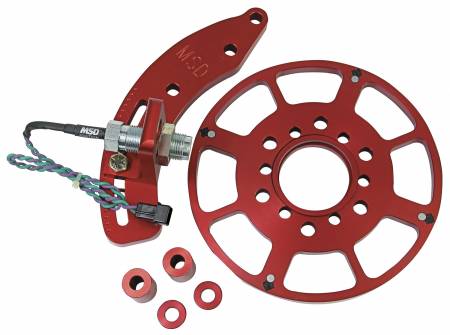 Crank trigger kit for use with MSD 6, 7 or 8-series ignition and timing accessories.

For a long time, racers have known that one of the best things to do to an engine to improve its performance is to stabilize the ignition timing. The MSD Flying Magnet Crank Trigger system does exactly that by using four magnets embedded in an aluminum wheel. Although similar in appearance to other crank triggers, the MSD Flying Magnet design works on a different principle.

Most crank triggers have a wheel, with steel studs sticking out, bolted to the harmonic balancer. As the crankshaft turns, the studs pass by a stationary magnetic pick-up, triggering the ignition. This pick-up can be triggered by other bolts, debris or even vibrations which will cause a loss of power or engine damage. The MSD Flying Magnet Crank Trigger uses four magnets secured in the aluminum trigger wheel that pass by a stationary non-magnetic pick-up to trigger the ignition. This 'flying magnet' design produces accurate trigger signals and the non-magnetic pick-up cannot be false triggered.

Each Flying Magnet Crank Trigger includes a two-piece mounting bracket for the non-magnetic pick-up that in most cases will work on either the passenger side or driver's side of the engine (the SB Chrysler and SB Ford brackets mount on only one side). The CNC-machined aluminum bracket securely holds the pick-up in place and is slotted to provide a wide range of timing adjustment. Spacers are included so you can mount the bracket on engines with standard motor mounts or engines with a .25' motor plate. These systems will trigger MSD 6, 7 and 8 Series Ignitions and all MSD Timing Accessories.